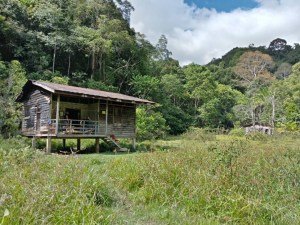 Borneo Travel are pleased to announce the introduction of our new trek, The Rundum Highland Adventure Trek, taking in the historical nature of the trail, the beauty of the villages and surrounding environment as well as meeting the true locals.  This is a new and unique trek that is currently available through Borneo-Travel.com.

Rundum is famous the world over for the Rundum Rebellion of 1915.  A famous Murut warrior named Antanom, from North Borneo (now called Sabah), received support from the villages of Tenom, Keningau, Pensiangan and, of course, Rundum to lead the rebellion against the British North Borneo Company – losing his life in the ensuing battle.

The British North Borneo Company had imposed many taxes on the local populous as well as forcing many to endure labour, including Murut couples when they had more than 2 children.  The local population ran out of patience and, in 1915, Antanom led many to engulf the administration buildings, attacking the British with much surprise.

The British sent soldiers to counter-attack but failed.  The British then set a trap under the pretence of peace talks in Rundum.  When the locals, including Antanom, went to attend the peace talks, they were attacked and arrested with Antanom later being executed.

Based at the border of Sabah and Kalimantan, similar to Long Pasia, it’s a place where the British had its interior district office in 1910 and the site where Antanom and others fought for their rights.

The tour includes options of:

All will include a stay in Tenom for 1 night before going into Rundum Highland which is 60km from Tenom.

This is an exciting opportunity to take part in a trek that I have dreamt of providing for many years.  After logging operations, the government has now upgraded the roads and from our farm stay it takes 1 hour and 30 minutes to reach by 4 wheel drive.  This is an adventure not to be missed and one not offered by any other tour operator.